This article is one of a series of amended extracts from Understanding Wellbeing (2011), edited by the late Anneyce Knight and the late Allan McNaught. There will continue to be developments in the field of wellbeing study, and the book and this material were published in pre-Covid times. Nevertheless, we felt it was worth publishing in this format, as a small contribution to the field.

Other articles in this series consider:

The word ‘wellbeing’ has slipped into our day-to-day discussions, including in pop psychology, in a range of social policy domains and in various fields of academic research. There are competing and contradictory definitions in the literature and some works about wellbeing discuss it extensively, though without actually defining it, or claiming that a definition is impossible. Even when the term is used it is sometimes not clear if it is something profound or just a linguistic flourish.

Taken together, the extracts seek to explore wellbeing as a free-standing, multilevelled and complex social construct. They argue that ‘health’ is but one component of wellbeing and, while the customary coupling extends ‘health’ to encompass the emotional and the psychological (and maybe even ‘holistic’), it pre-empts our understanding and debates about ‘wellbeing’. Wellbeing is a complex, confusing and contested field that would benefit from a framework within which to locate more specific definitions, and to tease out interconnections and cross-cutting issues. The prime objective of this article is to give readers a steer by providing a definitional topography for the concept of wellbeing. By providing such a framework, the article seeks to make a contribution towards the thinking and discourse about wellbeing.

The concept of wellbeing

Concern with wellbeing has generated a considerable body of literature and research on its many facets and meanings. There is an increasing acceptance that so-called ‘objective’ measures of social and economic progress are insufficient to analyse and describe human wellbeing, whether at an individual, family, community or societal level. Wellbeing is a feel-good concept that has occupied our ‘assumptive world’, i.e., what we assume and believe to be true about the world and ourselves based on our experiences. It is a concept that is freely used in modern policy discourse and has become an integral objective in many policy domains, usually without explicit definition. No one seriously opposes this development, although some commentators are amused at the onward march of ‘happiness science’. The volume of literature, the elasticity of the concept, and its steady incorporation into the national political and social policy agenda, suggest that the concern and the issues demand serious attention by those concerned with human health and social welfare.

Wellbeing as a concept is frequently coupled with ‘health’, as in the term ‘health and wellbeing’. It will be argued that wellbeing is a broader construct that has a certain moral and philosophical energy: it facilitates reflection on the human condition and provides the backdrop to public policy making and research aimed at the promotion of wellbeing as a desirable state. Therefore, wellbeing is conceptualised as an ideal state of being or existence that we and policy makers strive for, as a contemporary variant of the good life.

Most contemporary discussions of wellbeing start from the WHO definition that health is ‘a state of complete physical, mental and social wellbeing and not merely the absence of disease or infirmity’ (WHO, 1946). This early coupling has led to a tradition of health being regarded as the province of biomedicine and objectivity, while wellbeing was associated with emotional and psychological states, or subjective wellbeing, and the growth of a specific body of literature concerned with measuring wellbeing as a psychological construct. The individualisation and internalisation of wellbeing is also expressed in the recent development of positive psychology or ‘happiness science’. Interestingly, within the construction of wellbeing as a psychological, subjective phenomenon, some objective elements are usually cited, relating to familial, community and social factors, the built environment and the individual’s command over or access to resources. That being said, subjective wellbeing is important in that it tries to encapsulate a notion of how people cope, thrive and survive, individually and collectively.

However, wellbeing can be assessed as both an objective and subjective construct. Because of the complexity of the concept, wellbeing measurement must recognise its multifactorial nature and the need for a range of tools and disciplines, as well as social and policy changes, to be involved in its promotion, measurement and expression. Clearly, some of these instruments will be less validated than others, but this should not detract from the overall integrity of the concept and the approach. For example, an assessment of how well or happy people feel, as individuals or as societies, has been demonstrated by the psychological wellbeing literature. Diener and Seligman (2004) have argued that social policy formulation should take subjective wellbeing into account and should also attempt to monitor it on a longitudinal basis to inform policy. Subjective wellbeing has also been taken up by economists and transformed into the ‘Quality of Life’ concept. Quality of life usually refers to the degree to which a person’s life is desirable versus undesirable, often with an emphasis on external components such as environmental factors and income. In contrast to subjective wellbeing, which is based on inner/psychological experiences, quality of life is often expressed as more ‘objective’ and describes the circumstances of a person’s life rather than his or her reaction to those circumstances.

Clearly, the quality of life concept brings another dimension to our consideration of wellbeing and illustrates the obvious shortcoming of subjective wellbeing. By so doing, it makes the point that it might be more realistic to view wellbeing as a field of study that encompasses a range of specialist areas of research and practice aimed at understanding and promoting a positive state of existence in specific domains and for specific populations or socio-economic and political entities. We are only able to make sense of the varied literature and competing definitions by taking a broader approach that contextualises and incorporates operational definitions, such as happiness, quality of life, and objective and subjective wellbeing. Because of this complexity, the search for a generally accepted definition of wellbeing is fruitless, frustrating and ultimately impossible.

These concepts have also been extended to the societal level, with the King of Bhutan suggesting the development of a Gross Happiness Index (GHI) to replace Gross National Product (GNP) as an index of national wellbeing. Former President Sarkozy of France was the first developed-country politician to formally adopt this approach, with the commissioning of a group led by the economist Joseph Stiglitz to develop happiness measures for France. Also, according to Stratton (2010), ‘The UK government [was] poised to start measuring people’s psychological and environmental wellbeing, bidding to be among the first countries to officially monitor happiness.’ Concepts and definitions of wellbeing can therefore be perceived to be wrapped around the whole structure of humanity and its social and ecological existence. 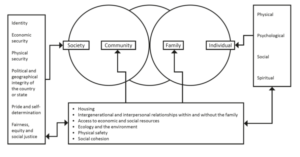 The importance of this framework is that it extends the definition and concept of wellbeing to a range of different dimensions beyond individual subjectivity, and it removes the conventional linking with ‘health’ to include the family, community and society as a whole. It also repositions and broadens the factors identified with individual wellbeing. At this level, wellbeing is a macro concept or an area of study concerned with the objective and subjective assessment of how human beings survive, thrive and function.

This model presents wellbeing as a dynamic process that gives people a sense of how their lives are going, through the interaction between their circumstances, activities and psychological resources, and includes their interpersonal interactions with significant social formations (the family and their community) within society. It is important that individuals, families and communities are not conceptualised as passive actors to whom others deliver wellbeing as a product. Wellbeing is also a result of their own actions and their own social and political preferences and interventions to change their circumstances and to influence the governance of their society to support what they perceive to be ‘good’.

As a result of this dynamism, high levels of wellbeing and consciousness about what wellbeing might mean give the motivation and capacity to respond to difficult circumstances, to innovate, challenge and constructively engage with other people and the world around us. As well as representing a highly effective way of bringing about good outcomes in many different areas our lives, there is also a strong case for regarding wellbeing as an ultimate goal of human endeavour.

This article has attempted to provide a definitional framework and an overview of the concept of wellbeing. It has demonstrated that the concept is multilevelled and may be described and measured subjectively and objectively. The achievement of wellbeing, in these terms, is not just a matter of behavioural change or the promotion of ‘positive psychology’. Its complexity and its multidimensional nature mean that the pursuit of public policy change and political action is a concomitant of any strategy to change objective reality or circumstances that are assessed as harmful to individual, family, community or societal wellbeing.

We've done the prize draw for these books and the winners have been notified. Commiserations if you didn't win this time, but keep a look out for more prize draws in the future.

To mark Learning Disability Awareness week, we're giving away five copies of our Essentials: Learning Disabilities book. It's a non-specialist introduction for nursing and health care students who want to know more about mental health and become rounded, holistic practitioners.

Bit of work in the Lantern garden this bank holiday weekend. ...